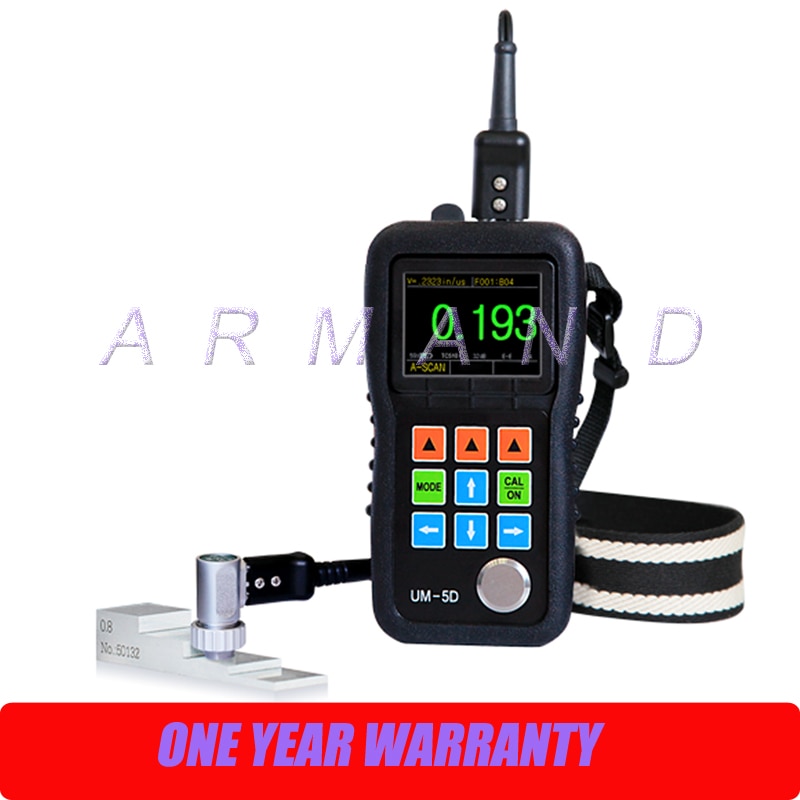 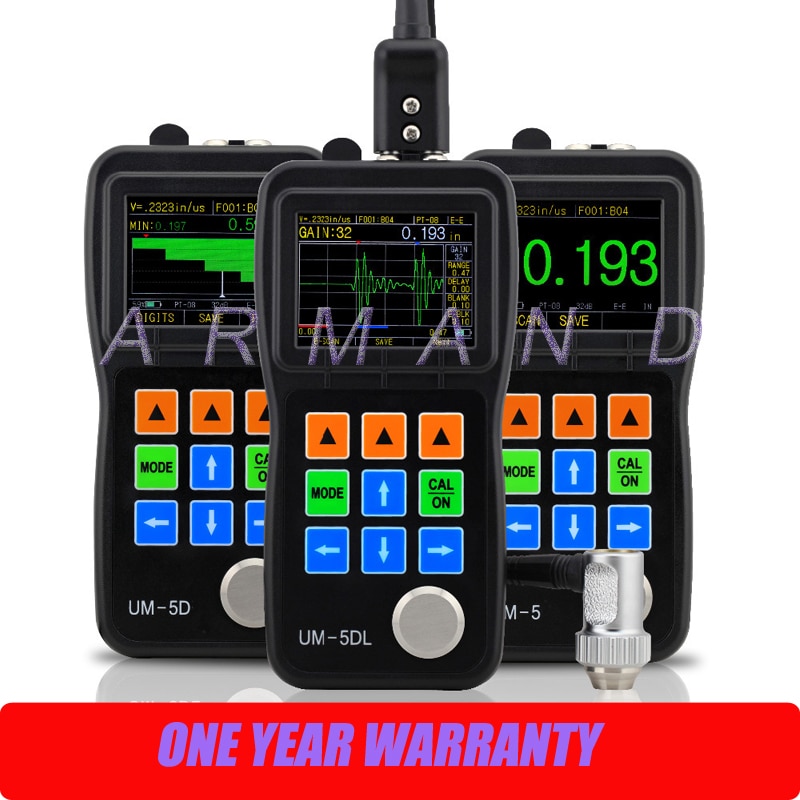 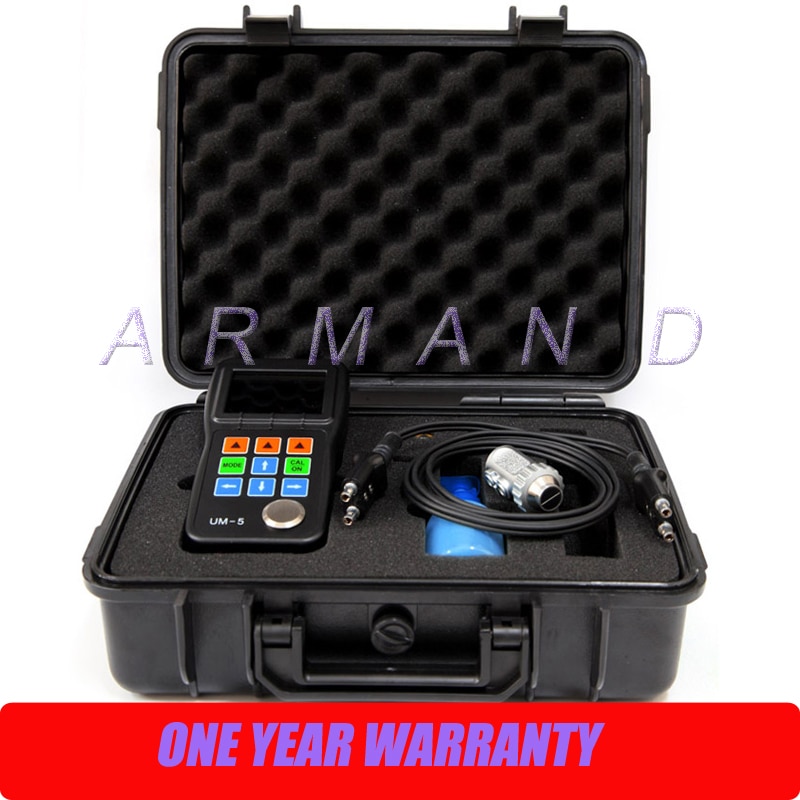 With Backlight Or Not: YES

1. Color OLED 320x240 Pixels Display
2. Live Simultaneous Color A-Scan and Thickness Display
3. Control of Gain, Blanking, Gate, Range, Delay, RF and Rectify Modes
4. Time-based B-Scan Display
5.   Echo-Echo Mode (Thru Paint & Coatings)
If the ordinary thickness gauges are incompetent in the rough applications. Please turn to our UM-5, which will maximize measurement performance for challenging applications and provide you with the cost-effective measurement solutions.
UM-5D Operation Principle
The ordinary ultrasonic thickness gauge with the principle pulse/echo method could do the test by the following two conditions.
1. The first underside echo must be higher than the gate. (The height of the electrical level of the gate is  unadjustable)
2. No other noise waves before the first underside echo are higher than the gate.  (Otherwise, we will get the thickness where the noise wave are produced)
For some conditions, the above situations could not be satisfied,for example, the highly corrosive near surface, coarse-grain materials (e.g. cast iron),aluminum, small diameter pipes, super thin sheet, super thick plate, rough surface, nonuniform inner structure, defect contained workpiece, lamination and so on which could not be tested by the ordinary gauges.
UM-5D will solve the above problems easily:
1. Make the first underside wave higher than the gate by adjusting the gain and height of the gate.
2. Invalidate noise waves before the first underside wave by the function of blanking.
MAIN FEATURES OF UM-5D
Live Color A-Scan
User could directly see the color waveform of the ultrasonic sound (or A-scan) on the screen, which is quite important for the occasions that we need to check the correctness of the testing results. Many cases will cause wrong testing results or even no readings. We could find the causes easily through the A-scan. Adjust the three parameters of GAIN, BLACKING, GATE, and then we will get the right readings.The uses for waveform: testing the correctness of thickness readings, finding out the causes of impacting the testing, and adjusting the parameters to solve the problems.
GAIN
Adjust the amplification factor of echo signal, increasing and reducing by 1 dB by hand. It is quite effective for acoustic attenuation materials (e.g. cast iron). 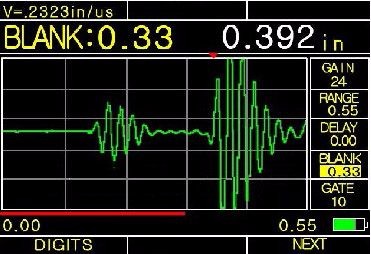 omit the front waves by blanking
BLANKING
Invalidate the waves within the red blanking strip, and omit the useless noise waves that impact the measuring like the waves caused by the rough surface or nonuniform inner structure.
GATE
The gauge will get the reading only when the wave is omit the front noise waves by blanking higher than the gate. So the adjustable height of gate is very important, especially for the applications of low echo signals (e.g. super thin sheet, super thick plate)
RED ARROW
The first intersection point between the waveform and gate is pointed by a red arrow, which can help judging whether the thickness value is correct (the red arrow should point the front of the first bottom echo if correctly tested). 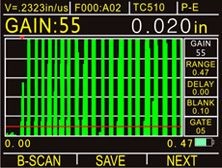 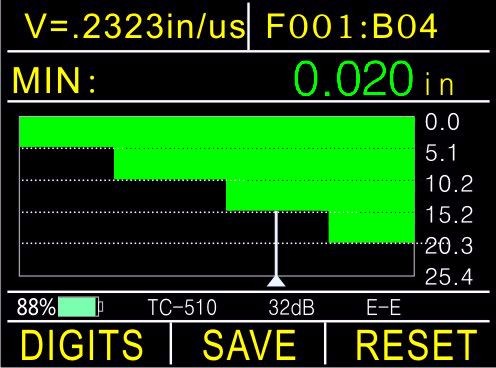 B-Scan Interface
Live Color B-Scan
UM-5 series thickness gauge has time-base B-scan function. Move the probe along the workpiece surface, then the cross-sectional profile of the workpiece display, use for observe the underside contour of the workpiece.
When remove the probe from workpiece, it could be automatically capture a minimum value of the B-scan image, and indicate the position of the minimum by a red triangle. You can see any point thickness value of the B-scan image by moving the pointer.
RecitifIcation Modes:four modes selective
RF: describe the whole echo waveform;
Half+: Show the Half -Wave positive without the Half- Wave negative;
Half-: Show the Half-Wave negative without the Half-Wave  Negative;
FULL: show both the Half-Wave Positive and  upturned Half-Wave Negative. 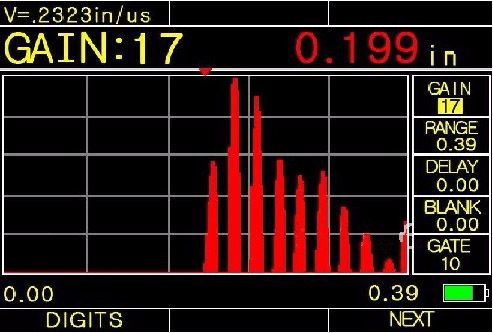 half-positive on alarm
Through-Coating or Paint Thickness Measuring Capability,
UM-5D offers Through-Coating or Paint Thickness,Measuring Capability - You can now test painted tanks, pipes, etc., without needing to remove the paint or make corrections for the paint thickness:
1, Without need of zero calibration;
2, Hight stability, Measured value is not affected by coupling probe pressure, layer thickness and the influence of the surface dirt stains;
3, Zero drift.
More Practical Functions
DIFFERENCE/RATE DIFF/RR%: This interface displays the currently measured and a nominal thickness input by user, the difference between the currently measured thickness and the nominal thickness and the ratio between the difference and the nominal thickness. Before using this mode, presetting the nominal thickness is needed.
Max./Min. Capture: On this mode, the current thickness, minimum thickness and the maximum thickness will be shown on the screen at the same time. You could drag the probe along the surface of the work, and the minimum and maximum will be shown automatically on the screen.
Alarm Mode: Dynamic  waveform color change on alarm
Update Rate: Update the rate of measurement result. Optional 4Hz, 8 Hz and 16Hz.
Multi- Languages Available: English, Chinese, Japanese,etc. 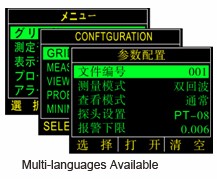 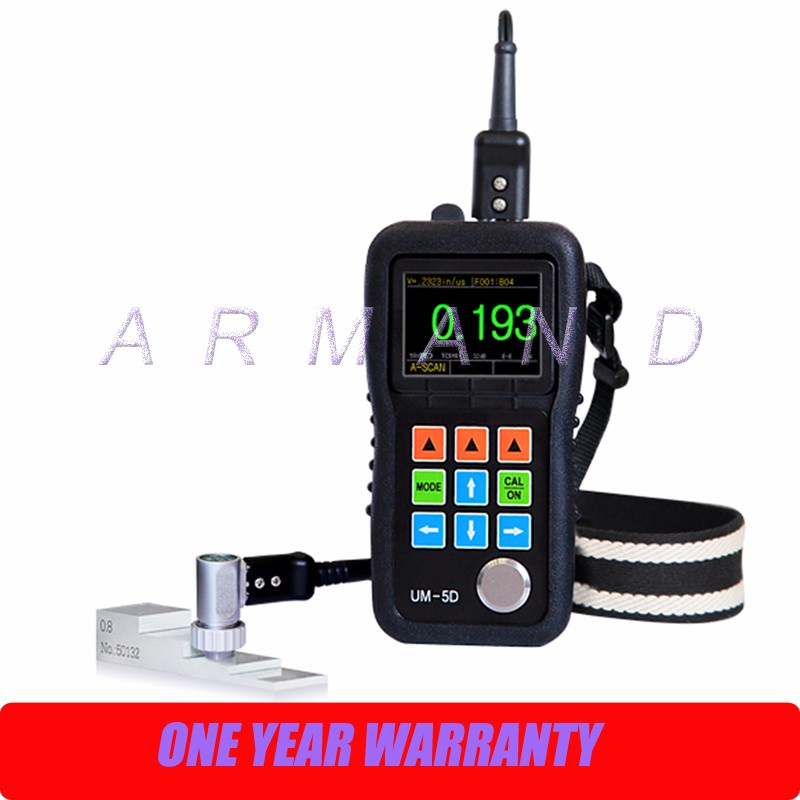 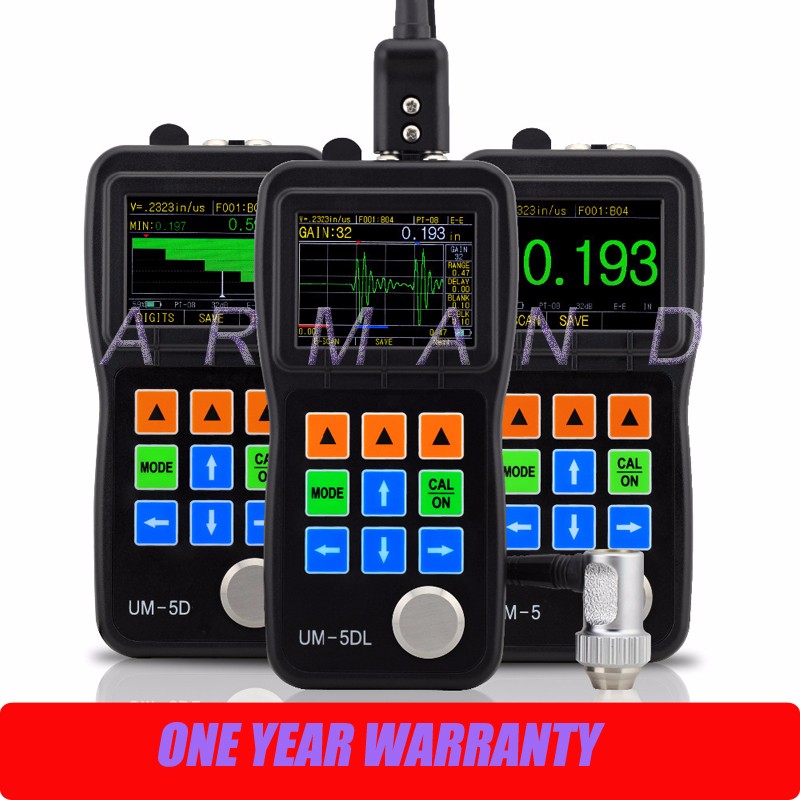 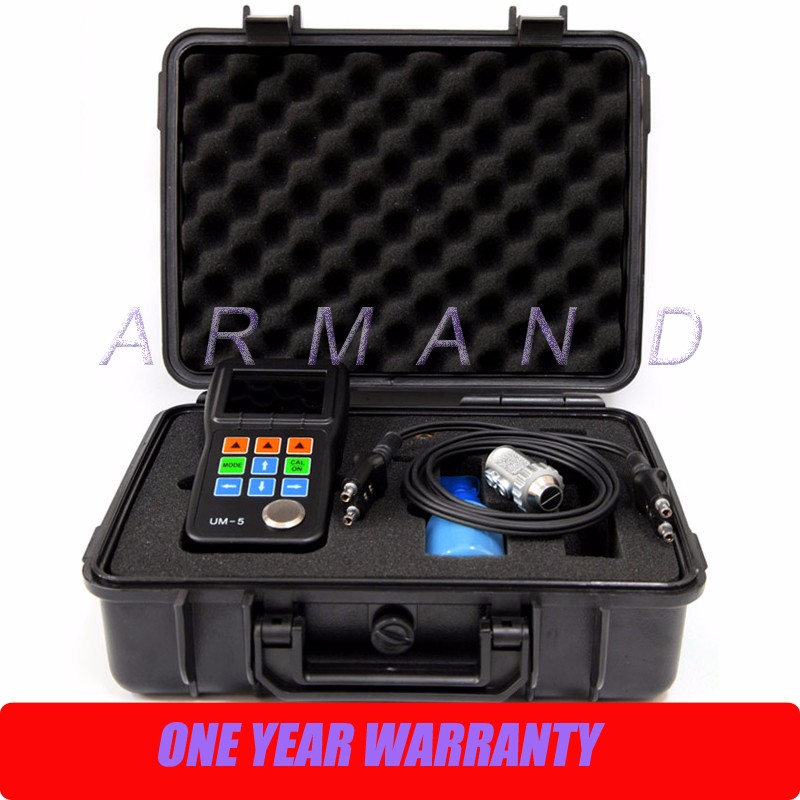 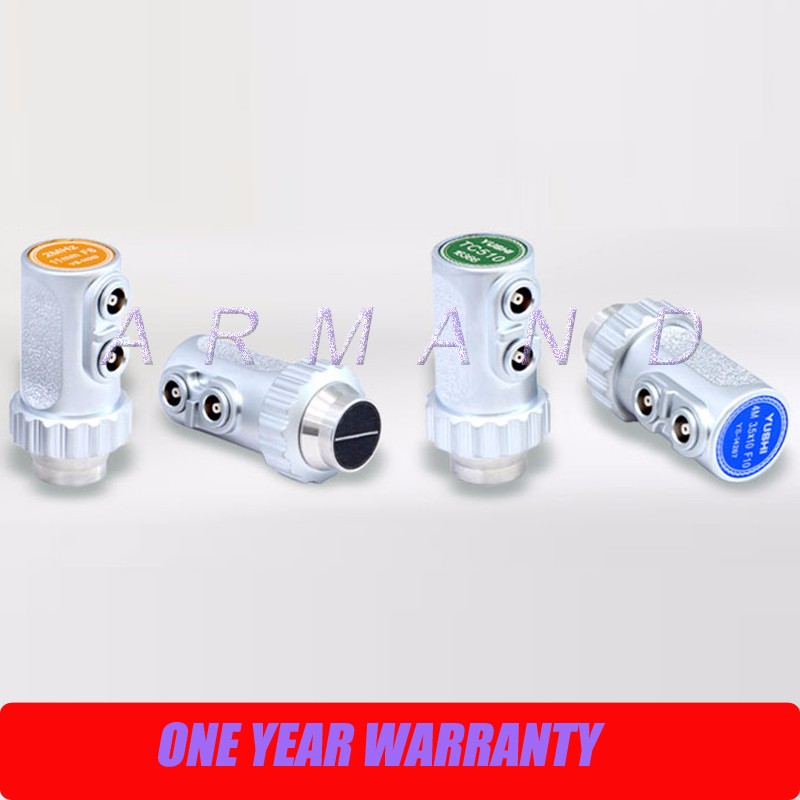